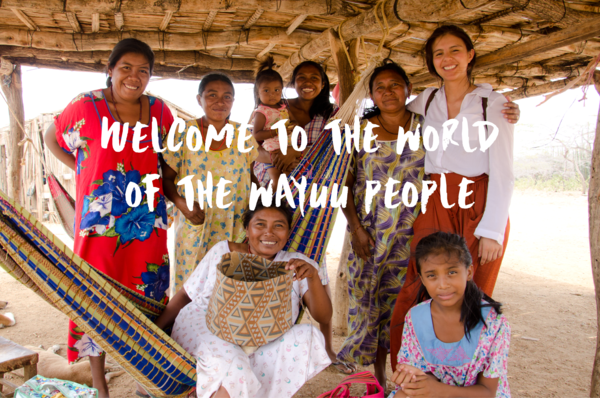 Learn about the culture of the Wayuu and Arhuaca people, and our time spent with the weavers, both in the unforgettable northern desert and the colourful mountains of Colombia.

During the Spanish colonisation of the Americas in the 15th century, beginning of the 16th century, La Guajira endured large periods of isolation due to the resistance of the indigenous communities. In fact, after a permanent state of war with countless rebellions, the Wayuu community, which always claimed to be very independent, was never conquered. The Wayuu people overcame the colonisation and were able to keep their roots and heritage. They survived trough agriculture and caftsmanship, as we can still see today. 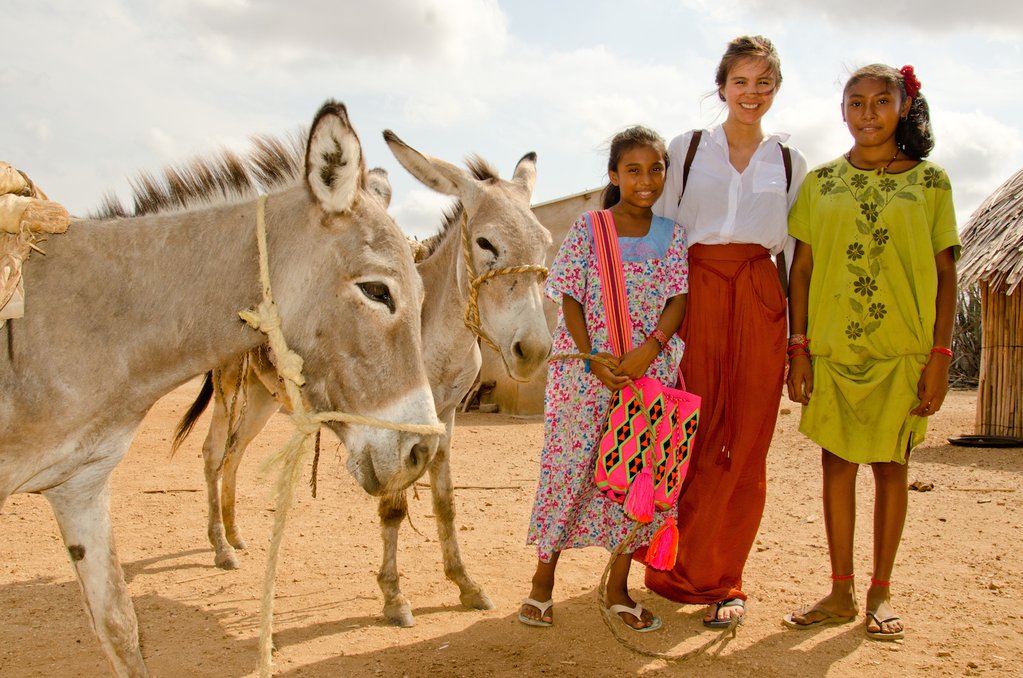 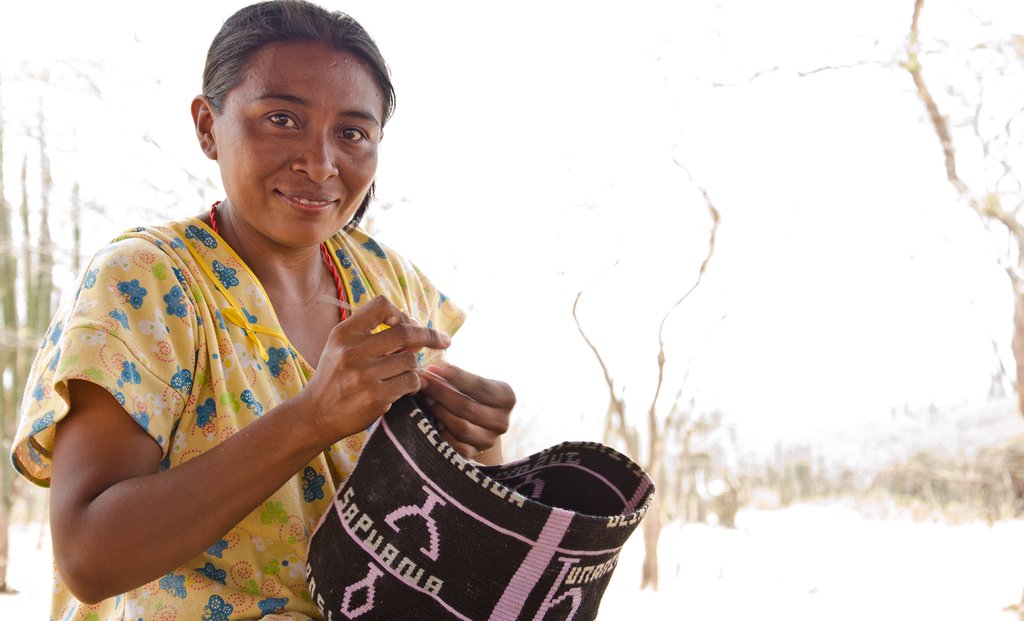 A “Ranchería” refers to a small, rural settlement or huts in the Alta Guajira where families of a different clans live. The Wayuu people sleep in hammocks and cook in saucepans that are usually suspended from hooks under the roof of a hut. The Wayuu women use to get up before down, light a wood fire and start preparing coffee. The native Wayuu only eat twice a day. The last meal of the day usually consists of “Yucca”, rice or pasta with goat, mutton or grated cheese, with fried bananas (platano) as a standard side dish. To drink there is a mug of “chicha” (a fermented corn drink). Everyone there (at the huts) eats with his or her fingers. The household chores are done in the early morning: the slaughtering and the grinding of corn for “chicha” a fermented corn drink which forms an important addition to the meals.

Some, but not all of the children, in la Guajira attend to small government schools that are usually at half an hour’s to an hour walking distance.

Some families rely entirely on crafts for their income. The Wayuu make all kind of handcrafted products for their own use as for trade. They buy yarn in bulk and subcontract work to their other families in advance. Some Artisans employ people to work for them at their house.

Wayuu artisans prepare the warp for a large hammock themselves, a skilled work not all Wayuu women can do. Some families sell their work to another Wayuu leaders (women) who collect crafts and sell them to travellers or send to the capital city. Girls for a early age learn craft techniques that are applied in the making of household goods: crocheting to make bags, embroidery to decorate the manta (dress) sprang (Egyptian pleating) and twigging for making a simple hammocks, and sometimes even to make pottery. 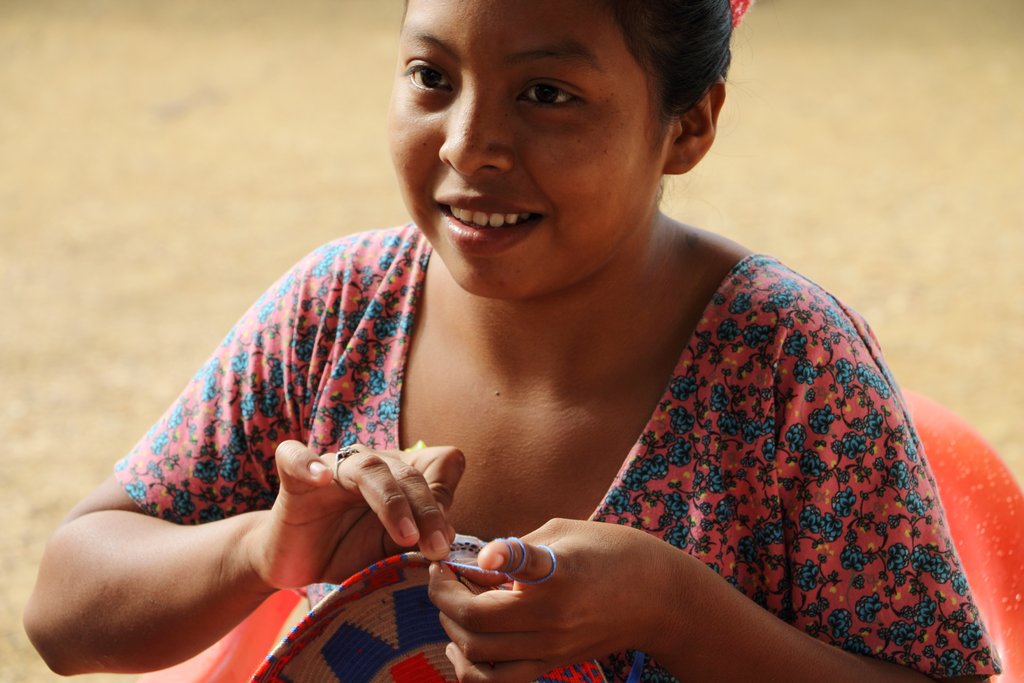 In the past the Wayyu women only made their handcrafts for their own use. Nowadays there is a growing interest in their work for outside their cultures.

The Hammocks are the most important textile products. There are two kinds of hammocks: one with an open structure “The Chinchorros”, are made using a warp twinning or weft twinning techniques and woven hammocks “Hammacas” that have a closed texture.

There is a great deal of variety in the Wayuu crocheted work. There are “Mochilas”, crocheted bags, in al shapes and sizes. The smallest one help to keep amulets strapped close to the body. Slightly bigger bags serve as moneybags and are worn by the man on their si’iras. Then there are handbags, “Mochilas”, bigger bags or “susus” that are used for the transport or storage of clothes and kitbags, “Kapoterras” for storing and carrying hammocks. These bags are all worked in a fairly tight stitch and crocheted edge with fringe, which usually has a geometrical or floral motive worked in.

The head of the clan is call the “cacique”, naturally his dress reflects his status. He wears a lion cloth with a Si’ira that is broader then usual and have fine designs. The cloths that stand him apart as headman is the “Sheii”, the dead man’s cloak, and the “karats” his headdress.

The Sheii is the most beautiful of all Wayuu woven textiles. It is a big rectangular cloth, which is worn, wrapped around the body. The cloak has many colorful bands that are woven in very broad traditional patterns, or kanas, that run along the length of the cloak. One cloth is woven by several women together who are seated next to each other at a big loom. The Sheii also serves as a shroud and that is why so few of them remain; they have all been buried with the cacique.

All the pictures showed in this section were taken during our trips and time living with the tribes in Colombia. For those interested in sharing our material or more information please contact [email protected] . for those who want to learn more about the Wayuu textiles and weavings techniques we highly recommend to visit Mirja Wark and take a look at her book completely dedicated to the Si'ira. Visit http://www.mirjawark.nl

We empower Indigenous women by enabling them to be self-sufficient and create a business for themselves, but we also impact the communities in two ways: 1) Women can provide for their families, and 2) We utilise profits from our sales to bring back water, an essential resource, to these communities.

Sign up to get the latest on sales, new releases and more …